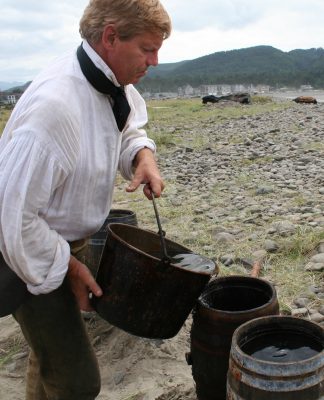 Are you worth your salt? We’d like to believe a specialized team sent by the Corps of Discovery definitely were. While originally this phrase was in reference to the times of Rome where soldiers may have either been paid in salt or given money to go and buy it for themselves here things turn a bit more literal. This team consisted originally of Joseph Field, William Bratton,  and George Gibson, with William Werner and Alexander Willard sent as a supporting cast. Their objective? Acquire salt.

The process was simple enough and is often likened to watching paint dry. You pull water from the ocean and boil it down until all that remains is salt. The real difficulty of making salt was their location and access to resources. In order to find a suitable location the crew ended up having to go much further south than anticipated, ending up in modern day Seaside about 15 miles away! Furthermore it was noted multiple times in their journals that they had continuous issues finding enough food to sustain themselves and were often sick from being fully exposed to winter storms.

Yet salt was an extremely important substance for the explorers as it was required to help preserve their food for the journey back. Food that, out here on the coast, would spoil and begin to rot frequently before they even got it back to Fort Clatsop. Beyond that it was also useful for tanning hides which would end up becoming about 338 pairs of moccasins here at the Fort.

If you’re looking to also make use of some true sea salt but don’t want to go through boiling water out on the Oregon coast during the toughest time of the year then don’t worry, we have you covered. We’ve recently begun stocking sea salt produced by the Jacobsen Salt Co., the first company to harvest salt in the PNW since Lewis & Clark’s salt works. Available in both 4 oz. bags as well as smaller travel tins, you’ll be able to make sure you have enough salt on hand to keep your own elk supply from spoiling. 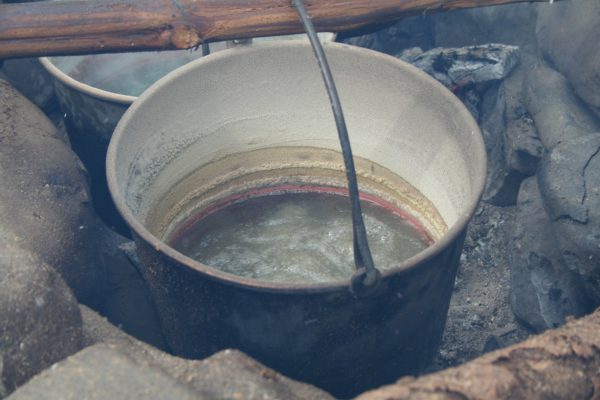