Standing arms outstretched, Meriwether Lewis beholds the Pacific with excitement and thankfulness. Kneeling in a posture of stability and supplication, William Clark records the event in his journal. An un-named Clatsop Indian, representing native assistance through the course of the journey, holds a starry flounder for documentation in the journals. Lastly, Lewis’ Newfoundland dog, Seaman, shows his unquestioning devotion to his master. Limited edition of 300, each 15″ bronze is a separate work of art. Cast in the ancient lost-wax process, each has its individual hand-finished mold. After its 300th casting the mold will be destroyed, leaving the original investors with the only sculptures from this edition. A certificate of authenticity will accompany each numbered and dated bronze. If upon receipt you are not completely satisfied with your cast bronze “Arrival”, you will receive a full refund ten days after you have received the piece. Simply return the statue to us in the original packing in good condition. Dimension:height-15″ (including walnut base) About Stan Wanlass… Stanley Wanlass has both a B.F.A. and M.A. degree in art, and has taught at universities in the United States and abroad, including the European Art Academy in Paris and the University of Grenoble, France. His sculptures are represented in the most prestigious museums and private collections in the world. He is the recipient of numerous awards and commissions, including a 32-ton sculpture for the city of Everett, Washington and a bicentennial medal design for the state of Oregon. In 1983 he completed a larger-than-life sculpture of “Arrival” for the National Park Service visitor center at the Fort Clatsop unit of Lewis and Clark National Historical Park. 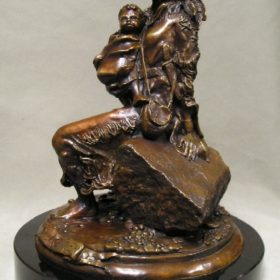