Sacagawea is standing barefoot at the edge of the world. She has reached the coast and is perhaps contemplating the long journey home. Seaman, Lewis’ Newfoundland dog, is at her side leaning against her and wrapping himself around her body. She holds her son Jean Baptiste at her waist. Moccasins dangle from her left hand as she cradles her son in a blanket that is draped around her back and shoulder. Astorian artist Paul R. Gillum, originally from Chicago, holds a talent for creating fine art with a distinctly whimsical and impressionistic flair. Having succeeded as an oil painter from the early age of 15, Gillum began to study sculpture in 1986. He was trained and guided by his teacher Stanley Wanlass (sculptor of Fort Clatsop’s “Arrival” statue). Gillum’s interest and talent in the use of bronze was shaped in part by the two men working closely together. In 1987 Paul opened his own studio, “Studio B”, dealing exclusively in fine art bronze sculpture. Gillum’s dedication and discipline have provided him the opportunity to exhibit work in many galleries and museums. His work is included in many private collections in the United States, Japan and Germany. He has been commissioned to create several one-of-a-kind lost-wax bronzes. He has been the exclusive sculptor of “Physician of the Year” awards presented by the National Registry of Medical Technicians since 1989. Bronze with black granite base. 15.5″ tall including a 1.38″ tall base. Base is 10″ wide. Limited edition of 100

There are no reviews yet.

Only logged in customers who have purchased this product may leave a review. 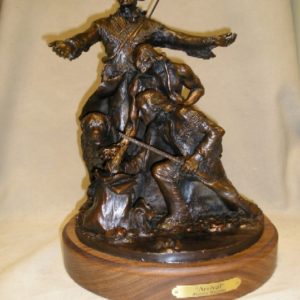 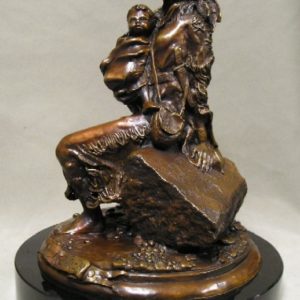